SkillsUSA is a student leadership organization for students training in trade, industrial and health occupations with over 300,000 members nationwide, and the 2022 New York event showcased 3,500 participants.
“We have extraordinarily talented students who are making a name for themselves, CV-TEC and the North Country,” Director of Career and Technical Education at CV-TEC Michele Friedman said. “We are so excited for both Amara and Shelbie and all of our students that competed this year. I am not surprised about their success in the least because the talent here is so rich.”
For the two students headed to Nationals, they were not satisfied just to be going. They had high expectations that they wanted to meet. 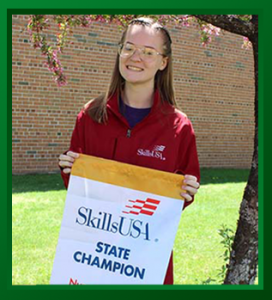 “I am going there to win,” Corrigan said after taking the gold in the New York competition. “I am not satisfied just being there. I figure if I make the trip, I might as well make the most out of it and try and win it all. I am not taking this opportunity lightly.”
Rice shared the same sentiment ahead of the national competition.
“I can’t wait to get down there,” Rice said. “I know I will be competing against the best  of the best, and I have been studying each day to get ready. It’s getting closer and closer each day, and I am extremely motivated.”
NEW YORK COMPETITION
Corrigan’s winning simulation featured an infant CPR demonstration, which is one of the first things Early Childhood Education students learn in their program.
“I explained what infant CPR was and detailed all the steps,” Corrigan said. “I did two full cycles of infant CPR and then wrapped it up with my conclusion.”
Corrigan first showcased her skills in front of two judges followed by a second round with six judges before she received a callback saying she was one of six finalists in the state.
Rice followed the same winning path as Corrigan, but with her own simulation in nurse assisting.
Her demonstration included transferring a patient from bed to wheelchair, emptying urinary drainage, and identifying anatomy and physiology.
“This was my first time getting to go compete in person, so being able to travel and getting to compete against people instead of doing it virtually was amazing,” Rice said.
THE WINNING NOTICE
Both Rice and Corrigan were absolutely thrilled when they found out they won first place.
“I don’t think it set in right away,” Rice said. “It took me about three days to really enjoy the fact that I won as funny as that might sound. To get that acknowledgement from New York SkillsUSA was an honor.”
Corrigan enjoyed that same feeling, and back at the Plattsburgh Campus, the timing could not have been better in terms of everyone finding out she won.
“They were livestreaming the event from the award ceremony, so we all had our livestream feeds on,” Friedman said.
“We were just listening and going about our business. While there was an announcement being made on the Plattsburgh Campus, that was when Amara’s name was called. We all just erupted with screaming and yelling over the loudspeaker as someone else was making an announcement.”
There was pure pandemonium shared across the Plattsburgh and Mineville CVTEC campuses when the winners were announced, and it was not just Rice and Corrigan  that made everyone proud.
CV-TEC sent 38 students to compete at this year’s SkillsUSA competition, and seven additional students received second-place honors.
Moriah’s Zoe Olcott (New Visions Medical), Keene’s Lacey Lawrence (Culinary Arts Management) and Keene’s Nevin Dockery (Cosmetology) all captured second-place finishes.
Four more Cosmetology students including Zainab Gondel (Crown Point), Isabella Phillips (Crown Point), Miranda Tompkins (Crown Point) and Corey Valentin (Boquet Valley) also took home second place in the Cosmetology Knowledge Bowl.

SUPPORT FROM CVES FAMILY
Supporting these students is the Champlain Valley Educational Services’ Board and Administration Team as well as the CV-TEC SkillsUSA Advisor Team comprised of
Co-Lead Advisors Nicole Santaniello and Jackie Dashnaw as well as Donna Wyant, Bevan Gertsch-Cochran, Jen Parker, Shawn Ryan, Kimberly Lincoln, Todd Menia and Maria Spadafora.
The Advisor Team and the entire CV-TEC staff who prepared these students for SkillsUSA are proud and look forward to continuing to support Rice and Corrigan in their futures.
“These opportunities are outstanding for our students,” Friedman said. “What this demonstrates is your zip code does not equal your skills. The students of the North Country are extraordinarily talented and can showcase their abilities and stand up to that talent from different tech centers in New York and across the country.”